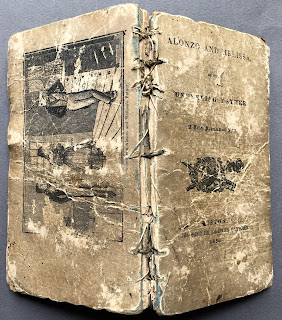 It wasn't quite a New York Times best seller--mostly because the Times didn't exist yet--but Alonzo and Melissa, a love story written in 1811 by Grand Isle's Daniel Jackson Jr. was a bonafide page-turner at a time when great works of American literature were hard to come by.

Jackson, had actually written the book across the lake in Plattsburgh, but soon fell in love with Mary Hyde, daughter of Jedediah now best known as the builder of the Hyde Log Cabin.  Jackson and his new bride settled in Peru, New York, but Daniel liked what he had seen of the islands and soon determined to move there.  In a letter written to her husband Mary pleaded with her husband not to do it.  "You suggested the idea of turning farmer and coming to the Island," she wrote, "The idea of raising hemp is chimerical in every sense of the word...there is nothing gained from farming on the Island."

Jackson stayed away for a while, working as a school teacher in New York, but upon the death of Jedediah, Mary inherited the cabin and the couple moved to Grand Isle permanently in 1829.  Jackson became the Post Master (the office was located in the cabin) and though some traces of further writing exist, he apparently was never able to match the commercial success of his first book.

As it turns out there may have been a good reason Jackson never even attempted a second book, he was a fraud.  Strong evidence exists that the story Daniel Jackson Jr. had published under his own name in 1811 had actually been published and mostly forgotten in 1804 by Isaac Mitchell.  How he came to publish someone else's story and why he was so much more successful at it than the real author is not fully known.  Jackson died in 1848 before the plagiarism came to light.  He and Mary are buried in Grand Isle Cemetery.