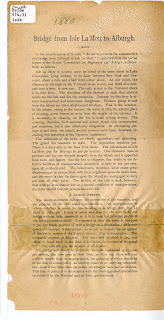 In 1880 the Vermont Senate took up S.120, also known as “An act to promote the construction of a bridge from Alburgh to Isle La Mott”.  The bill notes that the 1/3 mile stretch over which Route 129 currently runs was served by a ferry, however “the channel is such that adverse winds are the rule and not the exception,” and that “Persons going to and from the island are often wind-bound for days.”   If that wasn’t enough, the authors brought it home with what must have been a cogent argument to the men in Montpelier that winter, “several persons have been drowned, including two members of the Vermont Legislature.”
The bill describes Isle La Motte as a town with a population of 502 (31 higher than the 2010 Census) and a grand list of $960.00 (currently 1.27 million), and while the "town is too poor to pay the whole expenses of such a bridge," they speculate, "The fertility of the soil is such, however, that with an even chance and in a normal condition of transportation, the town should become prosperous and rich.
The bridge was completed in 1882, and while frequently threatened by severe weather, Isle La Motte's connection with Alburgh has held.  Today, bridge crossers are greeted with a small park and colorful signs advertising local events and businesses. 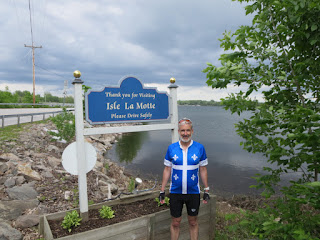