How Pickleball Conquered the Champlain Islands 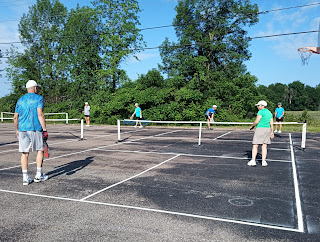 Tim O'Reilly, now president of the Island Pickleball Association, remembers how it all began.  A handful of players met on the basketball court at the North Hero School in early July, 2016.  Operating as a program within the North Hero Rec Department,  they used duct tape for lines and makeshift pvc nets.  Players paid their dues by stuffing small bills in a coffee can court-side, match assignments were worked out on the spot.

O'Reilly had been introduced to pickleball during winters in Florida and had a feeling the sport would translate well to Island summers.   How well, may have come as a surprise.  Like O'Reilly many summer residents had experienced the sport down south and jumped at the opportunity to continue play during the summer.  The welcoming nature of the sport and social experience brought many who had never played out to give it a try.  Soon the league had outgrown its North Hero roots.

Acting on a suggestion from the North Hero Rec Department, O'Reilly established an independent 501(c)3, called the Island Pickleball Association (I.P.A.) to take the league to the next level.  Now free to move across the draw-bridge, the I.P.A. worked to establish courts in Grand Isle, Isle La Motte, and Alburgh.  Play has grown from an initial 332 sessions in 2016 to 3762 in 2020 and is estimated to reach 4,800 this year.  The coffee can has been replaced by an online payment system and matches are scheduled in advance using an online scheduler.  Even with the expansion to ten courts demand is still far outstripping supply.

The I.P.A. is currently exploring a number of options to expand available courts and hope to one day host a regional tournament, which they believe could provide a great benefit for local businesses.